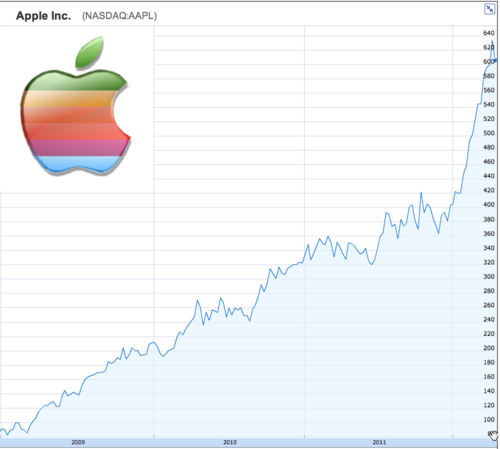 I have a bit of interesting financial detail about Rocketboom to share. It’s a method of fund raising that I don’t hear others talking about, and it feels wrong somehow, but also it’s working great, for now, so I wanted to throw it out there and see if anyone had any major criticism. One of the (many) ways I have kept Rocketboom afloat over the years is through a relationship I have built with Apple. You could say I am a lurker of sorts. Or perhaps you would call me a bona fide fan boy (since my first BBS which I ran on an Apple //e many years ago). Now I’m trading $AAPL stock, and making a very significant amount of revenue to help keep my business growing.

IMO, this is perhaps one of the most controversial ways in which I spend my time. Last year, after selling my Know Your Meme business, I made the difficult decision to take a hefty portion out of the proceeds and secure my own life with it. That obviously left Rocketboom in need of more support. While I’m no less dedicated, after all of these years, I had to draw a line and secure my own well being. I found my personality is completely unafraid of risk when I believe in something and have spent my every last dollar more than than once on Rocketboom. So now that I’m in a secure position with my own personal finances w/o ever having to worry that I will spend it all on Rocketboom, I’m actually in a better position to operate and grow Rocketboom. And the time to do that now, market-wise, as it turns out, is now.

At first, trading Apple was exciting. Each day I came home from the office and looked at all the money I made that day, just from letting it sit there. Once I got a margin account, I understood, more than ever, how the rich just keep getting richer. It’s certainly jaded me from my otherwise typically idealistic mindset but that’s another story.

As I began to study more about the market forces that effect Apple’s stock price, I noticed immediately that the biggest problem, OBVIOUSLY, was that trading consumed and distracted me from running my company. I like to create things and spend my days engaging in activity I hope is beneficial to the world. Trading Apple makes me feel selfish and guilty. But like the many professional traders who do wonderfully beneficial things with the money they make, it’s helping to enable me too.

By some analyses, Rocketboom, as a business, started “too early” (almost 8 years ago), during a time when there was literally no marketplace to support it. Over the years, I’ve generated millions of dollars in revenue, but the vast majority required inventing a new market proposal out of thin air every time, a new market justification to support it and then a new workflow to execute. Nary a sustainable standard insight. By other analyses (such as those of my own), Rocketboom owes everything it has to coming at exactly the right time. Most of my colleagues who started out around the same time, and gained a spark, have almost all given up or pivoted, having spent millions upon millions driving their business into the ground.

That’s because most of us thought the market place for Internet TV would happen sooner. But this is media after all. Think about how long it’s taking for the newspapers to die. It tends to take much longer than your typical Silicon Valley startup investment cycle to break down and disrupt an entire media industry for good. Sure, in the platform wars, there is already at least one major online winner on the hosting front: YouTube. But in the content wars, there isn’t actually any war at all. There is comparing and contrasting. There is awesome and crappy based on individual tastes. But the tools of the trade, and the value of the reach are now officially democratized.

The marketplace for content, on the other hand, which is here and in many ways growing, is STILL not supportive enough with any market standards. To say the least, for any online production company, it’s a RISKY business right now. You’ve got to lay awake at night thinking about how you are going to sustain and take it to the next level if you want to keep growing your product.

As a relatively inexperienced entrepreneur who is wired to think more like an artist,  I’m inspired by Apple and look up to them with wonder. I try to learn and apply what I can. I know this sounds cliche, but Steve Jobs is one of the only people who has inspired me. It’s a twilight of the idols in almost every other case.

So I figured, if I could just attach my business to Apple, theoretically, I could do proportionately just as well in terms of going up when Apple goes up, and going down when Apple goes down. Since I believe in the company and believe it will move up for now, more so than I feel the market can support Rocketboom’s growth right now, I feel I’m significantly decreasing my risks and setting aside a lot of worries regarding profits. All the while, using the extra money to improve upon my own products while the market matures.

So I take any revenue I do generate from Rocketboom, aside from what is needed to operate, and put it into Apple.

After awhile, I found from paying more attention that I could make even more money than Apple each day, proportionally speaking, by studying a common phenomenon that causes the otherwise healthy company’s stock to slip. The stock will drop for any number of reasons on any given day, so I’ll try to get out when it’s falling, and then wait for it to hit the bottom and start moving back up before safely buying back in with confidence that the company is going to keep selling more iphones and ipads tomorrow. If things get really messy and volatile, I just stay out and wait for a trend to happen. I’ve done some shorting too which takes this concept even further. The biggest predictable dip of my life just happened this week and I played it perfectly, thanks to the signals I picked up from experienced online traders who tweet play-by-play all day, one of the sources I use to decide what to do each day (*note: hard to find the signal in the noise there, yet another story)

You don’t need me to convince you that Apple is a valuable company that will likely keep growing, but here are the main points I think about in feeling bullish that Apple (and thus Rocketboom) will keep going up…for now:

1. My grad degree is actually in interface design, so I can appreciate the importance of what Apple has created and see why it’s ahead of the competition.

2. As of last month, Apple had only 9-10% share of the global mobile phone market. I.e., lots of room for growth. And though they only had 9% share, Apple generated over 75% of the profits of the entire market.

3. Unlike rivals such as Google and Facebook who give away free software such as Android and online CMS, Apple’s iOS comes with a hardware sale that causes people to turn into zombies and stand in lines around the world to be the first to pay hundreds of dollars for each new product.

4. Apple’s hardware cycle refresh rate is so rapid, people continue to buy more and more hardware. Some people buy new iPhones once or twice a year. I pay so much money to Apple it’s kinda crazy. But I only pay about $10/year to Google for gmail space and thats it. And sadly for Google’s advertisers, I don’t notice. Big difference in revenue streams. Just walk into any Apple store and you know what I mean.

5. All around the world, the Apple stores make more money per square foot than any other brick and mortar business on Earth. Though Apple also makes a significant amount of sales via their website and other stores.

6. Unlike other Silicon Valley companies, Apple is making the most progress in entering China. Out of the 1.4 Billion people in China, Apple has just established their first stores and now have 5. I.e., lots of room for growth.

7. During the 2008 recession, when Apple got dragged down with the market crash, guess who bounced straight up first and has been going up ever since? Even with the most expensive products on the market, Apple can sell out at the bottom of a depression.

8. The executives running the company post-Jobs have been there for ages and have (so far) taken almost no risks to jeopardize expanding on what they have. They will need to innovate to sustain, sure, but they are way ahead of the curve for now.

9. They have a lot of cash. LOTS AND LOTS of it. More than they need, according to them. They have formed a special committee to try and figure out what to do with it all! And don’t tell me how many countries they could buy, we know!

At least I can say this distraction has led me to study Apple more closely and I have been learning more about other businesses which at times has been applicable. Like a good liberal arts education, I guess I’m adding to a more well rounded understanding of how the rest of the world of business works while learning to develop my own. Am I doing it wrong?