Being in NYC, on most years, Rocketboom has done something to commemorate the 9/11 attacks.

On September 11th, 2007, we uploaded a video of George Bush being told that a second plane had hit the second World Trade Center tower.

You might of seen a segment before, there is slow-mo version that is typically shown. In time, this one has gone on to gain over 700,000 views and is notable for the amount of comments it has received, over 4000. Almost every day, we receive a comment on this video.

Personally, this video has become a big part of my consciousness for I receive an email in real time for every comment on every video we have ever posted to YouTube and thus get to hear people’s ongoing remarks about this daily.

Now twelve years later, and six years after uploading it, I decided to present an overview of what I think people are saying about it. I think it is interesting from several perspectives, but mostly from the perspective of psychology and how humans deal with large scale challenges like this.

From the standpoint of an entrepreneur who is forging new ground to someone who is running a city or even one of the most powerful countries in the world, you have to wonder, as we do, is this person right for the job?

I grabbed up the comments and put them through various text analysis tools and here’s what I came up with. I’m not sure there is any revelation here, or answers in particular. It is simply an interesting topic to consider, maybe a good question for someone who you are interviewing for a position. “What would you have done in that situation?”

Bush was visiting young children in a school at the time. At one minute into the video, you can see the moment where an agent enters in, whispers into Bush’s ear that a second plane had hit the second tower, and then the following 4 minutes of raw, unedited footage giving you a chance to consider his reaction to the news.

The undisputed #1 question here is, what WAS Bush thinking? I know what I was thinking. I happened to be tuned into the live news with a friend that day from Austin, Texas, and we watched live as the second plane crashed into the second tower. It only took me about 2 seconds to realize that this was defiantly not an accident anymore.

One recent commenter (and one responder) to the video had this to say:

It’s an interesting psychological question. Psychology is a pretty muddy study, but this question of what would you do under pressure if you were the leader of a country is the kind of question people want answered when interviewing you for the job of running a country. What would you do if your country or business was attacked? Can you handle the stress? Can you organize and take action? Can you lead?

First off, here is a word cloud of all of the comments:

Notice anything patterns? You can break this down in other more interesting ways. Here is a tree layout: 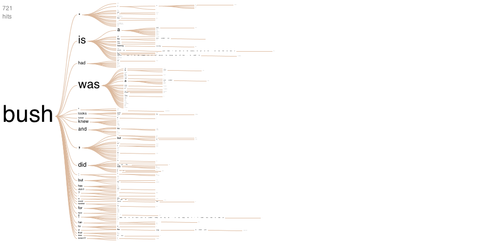 I followed several lines, for example, ‘Bush was in shock’: 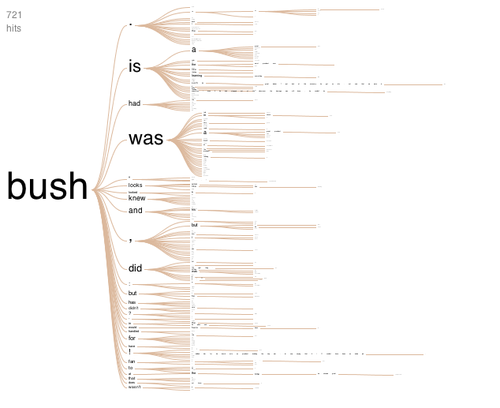 Here is a Phase Net cloud: 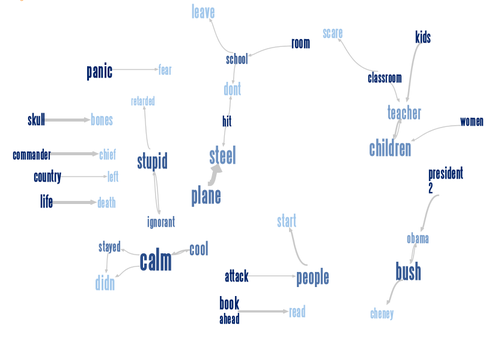 Granted this is one set of comments, on video, on YouTube, on Rocketboom’s account so the sample is not the best for general purposes. Here is an overview of just the last 30 days: 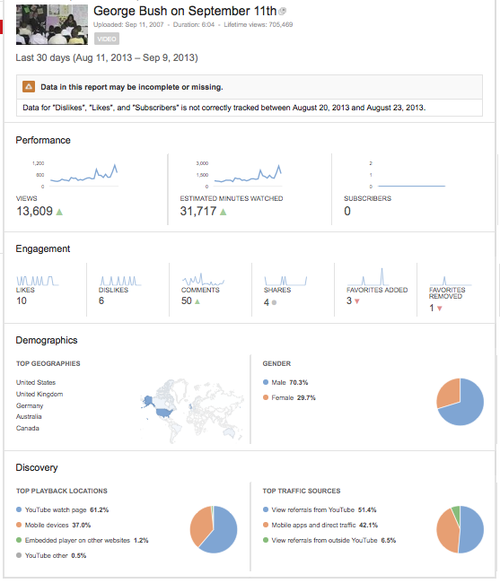 Essentially there are two primary directions people wanted to go with this:

1. A large number of people used this as evidence to support the possible idea that Bush ‘knew’ and had something to do with it. To clarify, these people are suggesting Bush didn’t react because he anticipated the news and that the whisper in his ear was just a confirmation in his mind that everything happened according to plan. It is a pretty tired theory but appears to remain alive and active, somewhat like the JFK conspiracies remain alive today.

2. While some suggested he was just shocked, an even larger number suggested that he did not react in order to be kind to the children and not cause alarm, and that this was the extent of it. Though as many commentators to the video countered, Bush could have politely and calmly left the room without the need to explain why, thus rushing off to lead a crisis while not alarming the children.

Fewer comments suggested other theories: He did not understand the implications; he was waiting for instructions from someone because he didnt know what to do; he was in fact thinking about what to do and used the opportunity to think about his plans in the background.

You have to admit, it is odd that he sat for so many critical minutes just thinking. What would the other presidents have done? 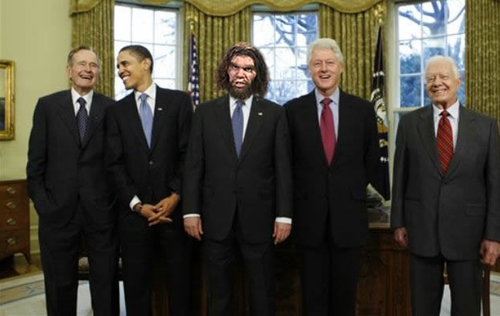