Fred Wilson put up a neat post about the value of the office, and how it matters. I feel very strongly about this. Contrary to the advise of some people, I think it’s important to be sure you have a good office space in particular, especially if you are going to be there all day, every day.

It’s a hard bill to swallow because rent money is money you are not going to see again. And obviously you can reduce that bill by moving out of the center, or by taking space that is not as nice.

It’s one of those things that most people are not aware of, but it still effects you. I had a couple of friends who lived in a damp, dark basement with smelly dogs and carpet and hardly any sun light. They were depressed. When they moved into a nicer place, with light, taller ceilings, wood floors – they didn’t know why, but they felt much better.

Rocketboom has had a tumultuous history with space, but I can’t really complain too much, we have done better than hoped for. Eventually we made it to a great space and it helps a lot with the spirit of everything.

Space is a major part of how you feel and as you know the better you feel, the better work you do. See? Proof: 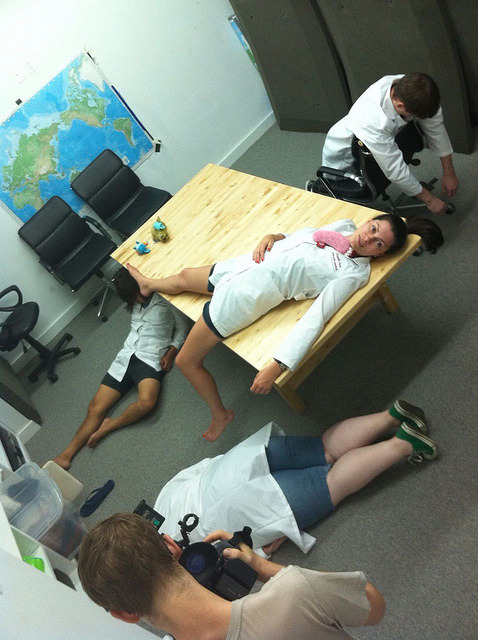 Rocketboom is excited to announce that we’ll be broadcasting live from our NYC studio, as part of the YouTube live streaming alpha. Tune in today and tomorrow for the Rocketboom Live variety show and Know Your Meme: DO IT LIVE! Anything can happen.

Rocketboom Live
Monday 9/13, 11am EST/8am PST
Watch it at http://youtube.com/rocketboom

Monday’s Rocketboom Live variety show is hosted by Molly of Rocketboom Daily and features the hosts of Rocketboom NYC, RocketboomTech, and Know Your Meme. Plus: special guests the Universal Record Database (who will be setting records on air) and New York Times technology writer Nick Bilton (talking about his new book, I Live in the Future & Here’s How It Works). Follow the conversation on Twitter with the #rblive hashtag.

Know Your Meme: DO IT LIVE!
Monday 9/13, 9pm EST/6pm PST
Watch it at http://youtube.com/knowyourmeme

Tour the Institute for Internet Studies, home of Know Your Meme. Your hosts, Internet scientists Yatta, Elspeth Jane, Mike & Patrick, will give a lesson in Memes 101 and conduct experiments that answer important questions like, “How much auto-tune is too much auto-tune?” Plus: a very exciting announcement about the show! Follow the conversation on Twitter with the #kymlive hashtag.

Tuesday’s Rocketboom Live, hosted by Molly, features Internet experts facing off in the Know Your Meme game show, plus the world’s most useless gadgets with Seth Porges of Popular Mechanics and live performances from juggling mogul Brian Dubé and a surprise musical act. Follow the conversation on Twitter with the #rblive hashtag.

All of the live broadcasts will be recorded & available on our YouTube channels & Rocketboom.com at a later date.

We’ll be posting behind-the-scenes photos and details on our production later today at dev.rocketboom.com.

Several people were saying that RSS is dead, kinda like Wired declared the Web is Dead, but in both cases, the claims were do to emotional feelings and statistics that were narrow in scope.

The online audio and video marketplace, for example, is fueled through a solid backbone of RSS at the core of it’s infrastructure, still yet today. Twitter and Facebook have done almost nothing to replace this backbone, they only provide a means for simple alerts, and in the case of Facebook, one additional distribution source.

Many audiences of audio and video use iTunes to keep up with publishers via RSS feeds and often even when the RSS feeds are not part of the iTunes store. Similarly, many people aggregate RSS content to Windows platforms without iTunes, and also, to their phones, and a number of other popular devices and software aggregators from iTV boxes like Boxee, Roku and Apple TV to regular web aggregators like Google Reader, or specialized platform-specific feed readers and media players.

Most of the apps that aggregate news, audio and video from various different partners, including Techmeme and Populrs rely on RSS as a consistent, as-soon-as-you-want-it method of getting updates with titles, descriptions, author and date metadata that is not easy to find or aggregate on-time, via Twitter or Facebook. Without RSS feeds, the likes of Techmeme, Popurls and Flipboard for example, must scrape, which is a very fragile, inconsistant, update-unfriendly mess.

RSS is also an important form of B2B media publishing. For each new release, large platforms like TiVo and Apple for example use RSS to receive automatic push updates from publishers and then automatically engage redistribution.

A typical bubble-like perception by the Valley is illuminated today as Connie Crosby tweets a few quotes about Podcasting in Canada. Stats come from the Canadian Telecommunications Regulatory Body:

“Podcasting has 40% growth every year in Canada. ¾ not redistributed radio content.” – Link

It’s true, Americans are not the only people who use RSS feeds! RSS was, and still is ideal for keeping track of a decentralized web of information. It’s enough just to keep up with the last 10 minutes of my twitter stream whenever I decide to check in, how am I going to discover your update without an email in my “pending-to-do” box, or a light that turns on in my RSS feed reader where I keep ALL the news that I don’t want to lose in one place?

I will not be surprised if things change, but with regards to online audio and video programming, RSS is a necessity.