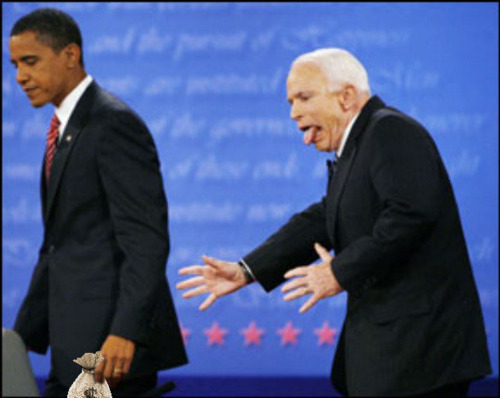 If you look at the last five Presidential races, in each case, the candidate who spent the most money, won.

Over the years, I’ve learned a few things about politics because my Dad was a major influence to the Democratic party and I payed attention to a lot of the things he was doing. He was a great man in my book and became one of the happiest people I have ever met, a workaholic entrepreneur driven by the pure passion of Democracy and opportunity for everyone. Some of his closest friends even accused him of being a Socialist.

When he first got his jet, he would fly Ann Richards around when she was campaigning for Governor of Texas and got some time to talk with her about various issues he was interested in. There he became dramatically inspired, and became interested in politics like I had never seen before. Ann Richards actually won, the first woman Governor in Texas.

Because Texas was next door to Arkansas, my dad became friends with Bill Clinton who was running for Governor at the same time. My dad LOVED Bill Clinton. If you ask me, I would say Bill Clinton was one of the smartest, most effective Presidents America has ever had. If you asked my dad, he would agree and add that Bill Clinton was the best man alive.

When Clinton was running for President my dad got much more involved. He rallied all of the trial lawyers in America, a massive group of people who are predominately Democratic, and have the wherewithal to donate to the cause (i.e. top 1%). The limit at that time that any one person could give, by law, was $2000. Today, you can give up to $2500 max to any Presidential candidate. My dad would host parties at the house in Dallas and invite the la-di-da of any field to meet and inspire everyone they could to donate and go back out with the inspiration to get their colleagues to donate too.

This goes for the primaries and especially for the major Presidential elections. The more money you have, the more you can spend on resources to keep up, pull ahead, run TV Commercials, get endorsements, mobilize volunteers door-to-door and on the phones, billboards, front yard signs, robocalls (I wish they would ban robocalls but sadly, it’s one of the most effective tools to use in negative attack campaigns by both candidates in the last days of a Presidential election), ignite inspiration (the best!), PR, PR, PR, and of course, RAISE TO SPEND MORE!

When Bill Clinton was elected, this was pre-Internet boom, mind you. 1992. He went on to became the first ever President to send an email.

Most people in America could not afford to give thousands of dollars to the candidates of their choice, so for the most part, the candidates would ignore almost everyone when it came to spending their time efficiently on the campaign trail. In other words, if you don’t have any money, you might be able to see a Presidential candidate speak if you are ambitious, maybe even ask a question from the audience, but you probably couldn’t get close enough to one unless you could pay $2000 plus at a fundraising event. To that end, many take the opportunity to manage a couple of minutes to mingle, and offer their support, with the hope their relationship will endure. What would you say for $1000 a minute?

With the strong support of my dad, after Bill Clinton out-raised and then defeated incumbent George Bush Sr., Clinton offered to nominate my dad to become a Supreme Court Judge. My dad actually considered it and even spent a couple of days shadowing one to see what the day-to-day activity was like. He just wasn’t interested. Plus, he would be required to sell his law firm. He told me that it was actually a pretty boring job.

For Al Gore’s run, my dad raised amongst the most, if not THE most money of anyone on Gore’s campaign finance team. Again, it was the trial lawyers, one of the wealthiest, largest groups in America, getting so much money to the Democrats. Sometimes people would put their money behind an opposing Republican candidate, and my dad would convince them to give to his Democratic candidate too. A lot of business people give full amounts to both the Republican and Democratic parties. My dad pointed out some of these people at various events and I would study their behavior to obtain a reference point for people who actually have a zero percent level of integrity.

It was during the race with Al Gore vs. George Bush that I got involved myself, so I decided to use the tools that I knew best, my computer. I’ll save the details of my own participation for one of the next posts but it was others who had the same idea that pitched in with their keyboards – it wasn’t going to be just about the money for long.

As a matter of classic campaign finance history, the Howard Dean scream marks the end of a new begging in raising campaign funds in the digital age. Howard Dean took my dad and the rest of the world by surprise like a ball right out of left field. The Dot Com Boom had come and gone, but now, still standing in the ruins of Silicon Valley, was the online shopping cart. Major sites like Ebay and Yahoo! effectively brought the shopping cart to the internet in a way that got people in America comfortable with the idea.

Suddenly, people were giving to Howard Dean in record micro-donation numbers. $10 here, $5 there. It was so significant, Dean shot up, out of nowhere, and spent, and got more, and people noticed. From a complete unknown and outsider to cant-deny status it was money, from anyone! The other candidates were still mostly ignoring the web at this time with small amounts of their own spending, just going after the top 1% as usual. It was the new Bored At Work who sat at computers all day with above par salaries while scrutinizing a variety of information online and participating with blogs and forms, that were becoming influential.

However awesome, it was still a pretty small percent compared to the classic, top-dollar machine. Howard Dean eventually lost out in the primaries to John Kerry and his Kerry’s running mate John Edwards. Kerry/Edwards lost to incumbent George Bush Jr. and Dick Cheney. Gives ya shivers to remember all of this doesn’t it? The money is one thing, but finding the right person for the job is an uphill battle.

My dad eventually got the internet and election after election, through Clinton, Gore, John Kerry, John Edwards and Obama, my dad became one of the most important people to have on your team. The same was true for the Democratic primaries and when Hillary Clinton was running for President, she wanted him, and so did many others. It KILLED my dad that he choose between John Edwards and Hillary Clinton when they ran against each other but he knew he would support whoever won in the primaries and raise as much as he could to win the election for the Democratic cause. He would of been excited if Hillary would of won and he would of become Attorney General had Edwards not fucked it up so bad for himself and everyone around him.

Just as Obama raised the most funds, and just before he won, my father, Fred Baron, fell weak from cancer and passed away in October, 2008.

HOW WILL SOCIAL MEDIA EFFECT THE RACE?

Already in time for the 2012 Election, the Republicans have raised over $186M but most of that has probably been spent now, fighting against each other. At the top of the heap, Romney has brought in over $30M for himself, twice that of any of his contenders. This suggests he may win the ticket. Obama has not been sitting around waiting for this to play out, though. To date, for his 2012 re-run, Obama has already amassed $100M and doesn’t have to spend any of it to fight other Democrats. Interestingly, Obamas micro-donations account for an estimated 40% of his money so far.

Considering the exponential growth of people with access to online payments, along with the power of the established social media landscape to take control of the message, this election will see many surprises. Don’t you assume Anonymous, Reddit, and #OWS for example might actually be influential?

For some reason I have become especially interested in a couple of topics: 1. The effect of the international online community – If you don’t live in America, what can you do to contribute to effecting it legally, for after all, you may have a strong opinion and might be effected in your own country based on who wins in the US and 2. What about Twitter, Facebook, Foursquare, blogs and YouTube in terms of their contribution to campaign finance? After all, the reason for raising the most money is to spend the most money on press, yet these platforms are becoming the biggest, most influential press there can be, for even people are now themselves the press and as you know, everyone has their opinions. More on these topics soon.